The power and potential of the next generation cognitive campus are transformative as the industry undergoes a massive transition to hybrid work in the post-pandemic era. A key underpinning to successful campus networking deployments has been our very first acquisition of Mojo Networks for cognitive Wi-Fi. Arista’s entry into wireless is only in its third year, yet the advances in this space will be profound over the next decade.

Prior Decades of Wi-Fi Performance

Wi-Fi or IEEE 802.11 as a wireless LAN (WLAN) has evolved from a “nice to have” option to more mainstream access for the campus. Wired and wireless are becoming ubiquitous and equal citizens as the throughput of wireless LANs increases from megabits to gigabits. From low data rates with the introduction of 802.11b and 802.11a in 1999 that were still behind wired data rates with virtually almost no client devices (laptops) that had Wi-Fi adapters to the Wi-Fi evolution, rapidly moving to 802.11g and encouraging wider use not only at home but also in the offices with data rates up to 54 Mbps supporting basic consumer and enterprise applications like email and web browsing. The 802.11n standard followed in 2009, as a real change. It supported 2.4 and 5 GHz frequencies with data rates up to 600 Mbps and it also brought new antenna technology (MIMO) and many other features that turned the previous destructive behaviors of RF into constructive (multipath for example). In the 2010 era the widespread use of mobile iPhones made wireless a de facto requirement.

Clearly wireless LAN access has become mainstream in enterprise networks. In the 2020 era 802.11ax delivers 2.4 GHz frequency range and opens the future use of 6 GHz spectrum. Wi-Fi 6 stands for 802.11ax in 2.4 and 5 GHz ranges and Wi-Fi 6E stands for 802.11ax in all three bands. Clearly the introduction of up to 1200 MHz of the new spectrum space, Wi-Fi 6E represents the biggest change in a decade. Combined with cognitive software, Arista Wi-Fi brings plug and play automation, AI/ML based troubleshooting and security to the access points for holistic network assurance. This cloud-based, controller-less architecture with Arista’s Wi-Fi6E improves scale to millions of APs and brings cognitive value as shown in the figure below: 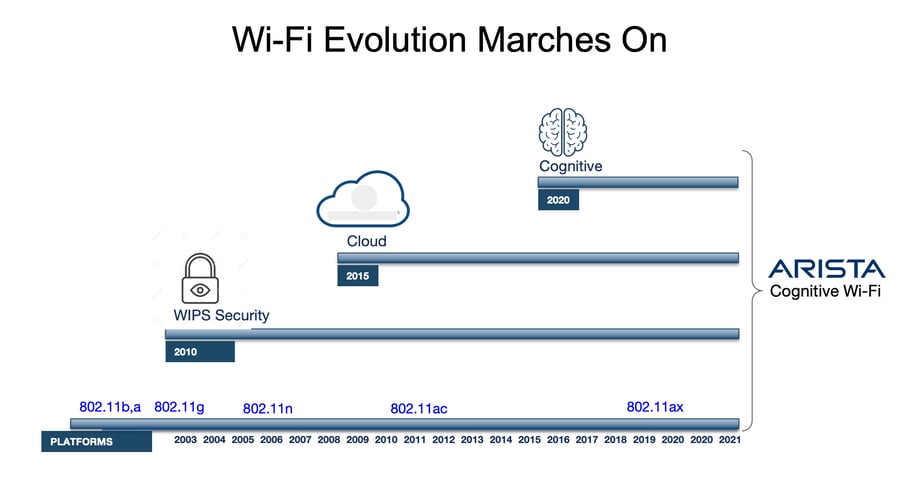 Cognitive Wi-Fi in the Post-Pandemic Era

Summary: From Airwaves to Cognitive Experience

Arista’s latest introduction of the cognitive Wi-Fi 6E platform exemplifies our commitment to performance and cognitive architecture for the wireless campus. These client to cloud predictive tools extend airwaves to network services for prescriptive experiences. Arista is now delivering cloud principles to the wireless campus by holistically breaking down the artificial divide between LAN and WAN to deliver uncompromised PIC networking. Welcome to the new world of cognitive campus networking in the post pandemic era!