At Arista Networks, the status quo inspires us to innovate and continue our mission to reinvent the network – from ­­cloud to client. Today, we’re continuing that journey – into the campus network. Let’s face it; the legacy three-tier architecture of access-aggregation-core is wasteful and oversubscribed – creating a perfect storm for market transitions and Arista innovation.

In a modern network, change is not only a constant, it is a continuum in time. Managing dumb pipes with software as an afterthought is over. Every piece of computing infrastructure must be smarter, or it must be eliminated. This is especially true in the campus, where connected people and devices are exploding exponentially.

Deep innovation drives market transitions, which are inevitable in networking. The digitalization of everything is driving and disrupting legacy network architectures, creating an inflection point for reinvention of the architectural framework.

In 2018-2020 we’ll witness the next wave of campus, defined by cognitive cloud networks. It’s the difference between dynamically shaping deep-network behaviors and merely driving intent. Once again PINs, or places in the networks, are changing to Places in the Cloud, PICs, to unify LANs, WANS, L2 and L3 switching across silos beyond the datacenter with Ethernet at different speeds. Arista’s 5 A’s are not only driving cloud networks but also apply to the campus ahead. To appreciate this next step in PICs let us review the key drivers in the campus as shown in this figure below. 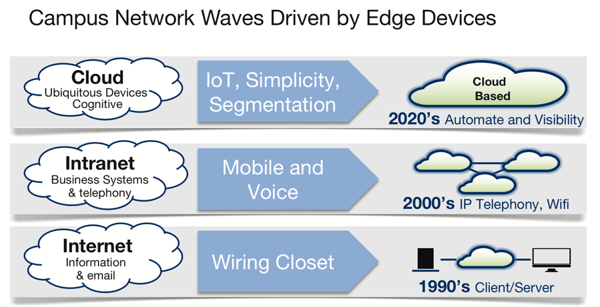 In the first wave of the 1990s, devices were powered by the wiring closet with shared hubs from companies such as 3Com, Synoptics/Bay and Cabletron, and hardly exist today in original form. This phase was driven by the client server internet and web applications that continued for many years, further fueled by intranets including voice-based IP telephony applications and mobile users based on 802.11 wireless LAN. Today, companies such as Cisco and Aruba/HPE are market leaders with their wired and wireless offerings.

The next wave of disruption is imminent, driving ubiquitous information, communication and IoT device connectivity. This demands new mechanisms for identity and security segmentation, ushering the third evolution of campus to the cognitive cloud-networking era.

Arista is once again disrupting the status quo, this time in the campus. The legacy three-tier architecture of access-aggregation-core is wasteful and oversubscribed, necessitating an overdue upgrade. Arista’s newest product, the single-tier 7300, is the ideal platform developed on the familiar and popular single image EOS®. Based on wire speed L2/L3 Ethernet at 10/25/50/100G switching rates with high resilience, secure segmentation and encryption options, the 7300 comes in two chassis models for 4 and 8-slot with 25-50 terabit scale. The new Spline redefines the campus network with active multipathing as the one-tier nerve center for the myriad of edge-devices integrated into a single fabric. At the same time Arista is committed to its partners and customers for interoperability with the myriad of existing device layer options. We work closely with our technology partners HPE/Aruba, VMware and many security partners to help our customers realize the full value of cognitive campus networking solutions as shown in the figure below.

At the core of Cognitive Cloud Networking, the network discovers connected devices, applications and data. It can then assess profile-based parameters such as configlets, bandwidth, packet size, IPG, open ports, white lists, etc. In combination with secure network segmentation methods, the Cognitive Campus network assures the mitigation and appropriate communication of devices.

Arista’s CloudVision is modern software for the new cognitive management plane architecture. Together with Arista’s publish-subscribe state NetDB, CloudVision leverages state-streaming and data-driven ‘Turbine’ analytic agents to enhance the network wide control for customers with a Cognitive Management Plane. This is a powerful architecture and right step forward in cognitive cloud-management for campus-wide networking akin to cloud dashboards with many forms of segmentation options across the port, network and cloud forms of security.

Campus PICs for the Client to Cloud Era

Webinar in July on Campus Networking