Reflections on the Cloud Networking Decade

When I joined Arista ten years ago, we were in the midst of developing a novel purpose-built software architecture from a clean sheet of paper for networking. The financial services industry was in crisis, with the collapse of major banks like Lehman Brothers. In parallel, emerging slowly but surely, was a new breed of hyper-scale cloud operators. Amazon AWS, Microsoft Azure and Google GCP were in the early stages of shaping what was to become the public cloud. The requirements of these new titans provided a source of inspiration for the Arista founders and me. We couldn’t have predicted the pace nor the impact of this cloud fury; it came strongly and rapidly. As I reminisce over the past decade, it is clear that the cloud inflection has forever changed the face of enterprise IT for the better. Yet it is just the beginning, and there is much ahead.

To truly appreciate modern cloud networking principles, let’s begin by reviewing how complex and gnarly traditional networking was in the 2000s era. The legacy enterprise network often operated with the same monolithic software stack (with multiple versions of software) based on brittle and fragile software, often 20+ years old. These products were based on inflexible ASICs (applications specific integrated circuits) using older semiconductor processes yielding low performance/densities and consuming high amounts of power. Frustrated by this landscape and the consequent limitations of scale, cloud companies such as Google and Amazon initially built their own “white boxes” internally. Until Arista arrived, the history of enterprise networking was littered with proprietary protocols, monolithic software spaghetti code, old-fashioned CLIs (Command Line Interfaces) and multi-tiered networks with oversubscribed network designs.

Our customers challenged this status quo. Together with Arista they helped shape and define the profound impact of cloud networking based on software-driven principles and programmatic interfaces instead of fixed function rigid boxes. Our customers’ goal was to reduce capital and operational costs dramatically, while improving agility and scalability, and they achieved this though Arista‘s technology as shown in the figure below. Let us take a trip down memory lane.

Perhaps one of the most compelling and proven cases for low latency in the 2008-2010 era was algorithmic trading. The market data industry was able to adjust and input data nearly instantaneously, vying with each other for a competitive edge on order transactions measured in fractions of microseconds to gain competitive advantages in electronic trading. The Financial Information Exchange (FIX) protocol widely used for real time information transactions needed speed and smarts; profiling protocols (such as Precision or Network Time Protocol, PTP/NTP) enabled ultra low latency transactions in nanoseconds. Measuring and sampling latency delays accurately using Arista’s Extensible Operating System (EOS®) for optimal synchronization along with Arista’s 7124 and 7148SX became the staple diet for High Frequency Trading (HFT) customers. In addition to Financial services, there were use cases that needed low latency architectures such as high performance computing, web and database clusters, storage access, seismic analysis, large scale data analytics, and virtualization. Unlike the alternatives, Arista was bringing the optimal combination of 1G/10G switching density, footprint and latency, and EOS extensibility with our 7000 series of switches. 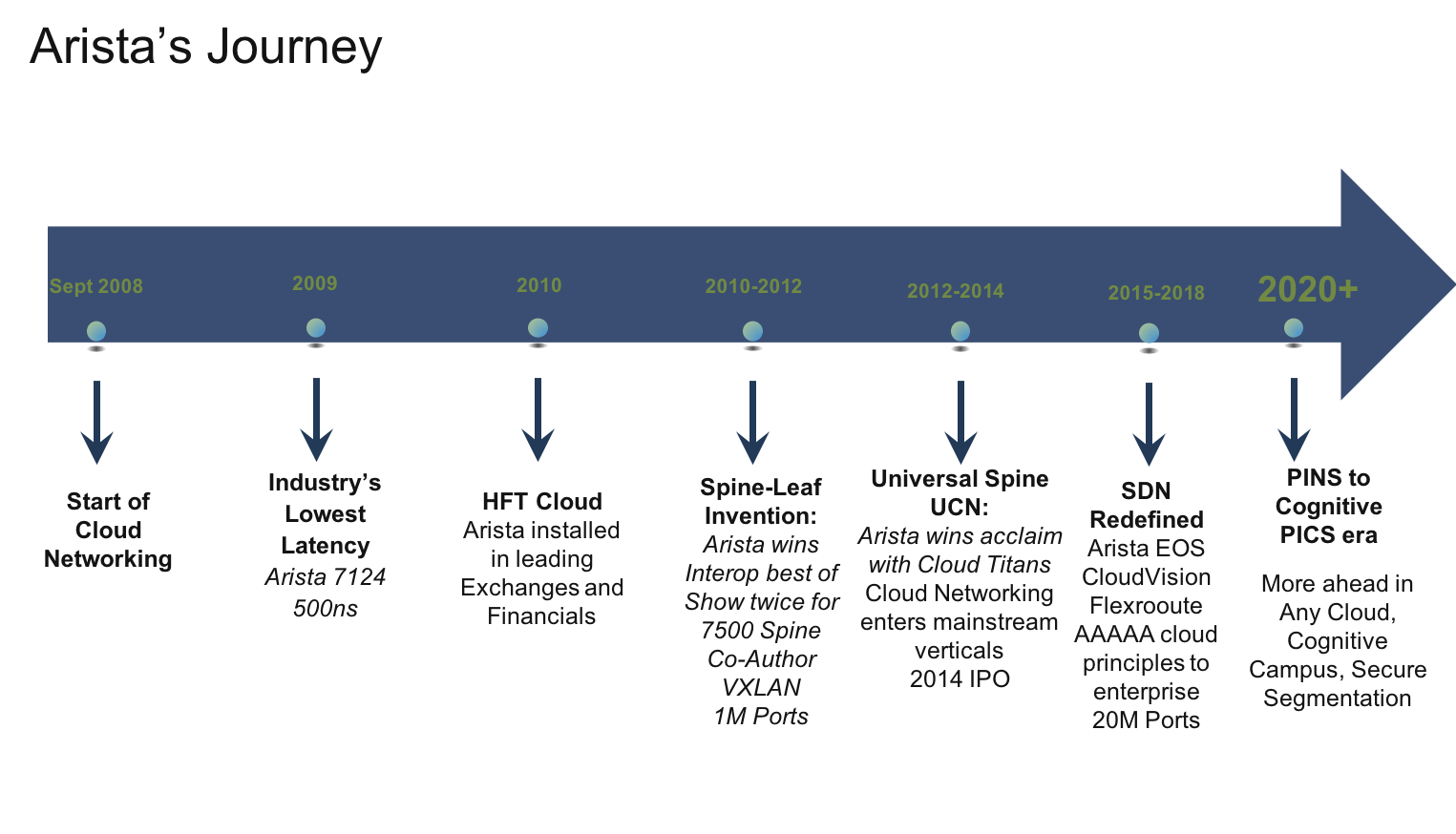 Figure 1: Arista Chronology of Events in the Cloud Networking Decade

The Universal (spine-leaf) Cloud Network emerged in the second phase of the Cloud Networking decade, pioneered by Arista to deliver unprecedented cloud scale for 100K+ servers with reliable wire speed performance. Broadcom, VMware and Arista co-authored VXLAN for extended L2 domains across L3 while cloud titans redefined networks with BGP and multipathing with granular programmability. While many tried to mimic the marketing and concept, Arista EOS (as far as I can assess) is the only programmable software stack in the cloud networking industry. With self-healing state-based publish-subscribe Network-wide database (NetDB) properties, the quality, agility, availability and automation of the network changed the lives of network administrators. Customers could reclaim time and operational cost away from the perils of legacy networking. Data moved to real time across Zettabytes of storage and the dynamic nature of modern network traffic ensured workload mobility and workflow visibility for ever-increasing east-west scale and traffic across millions of machines in cloud datacenters.

While SDN (Software Defined Networking) became a popular term during this time period, Arista had already been at the forefront of driving SDN capabilities with uniform programmatic control. We did this by not only expanding our Arista EOS for the data plane and control plane, but also by building meaningful network-based manageability and a user-friendly dashboard. Complementing siloed controllers, Arista developed CloudVision as an open turnkey tool for change control, analytics, compliance and security. Through close work with many customers and a broad ecosystem of partners, including security vendors (Checkpoint, Fortinet, Palo Alto and Zscaler), virtualization providers (VMware and Red Hat), system vendors (such as HPE), software infrastructure experts (such as Service Now, Splunk, Docker/Kubernetes), and public cloud providers (AWS, Azure, Equinix Google and Oracle), CloudVision is network management done right. Rather than bringing irrelevant information via cosmetic GUIs (graphical user interfaces) with slow polling agents, we focused on an operational cloud portal to help enterprise customers manage their on-premise, public and hybrid clouds.

Regardless of network workloads and location, networking can no more be done in siloed boxes. It must transcend the legacy experience by seamlessly applying the right security, routing and monitoring profiles across applications and users. Arista is not merely about switches and routers moving packets. We are building the pillar and cornerstone for reliable and cognitive networking, correlated, automated, and visualized via CloudVision. Users don’t need separate routers; routing can be a software option. There is less need for dedicated tap aggregation or siloed security devices. Software is transforming these functions as options for network tracers or segmentation of traffic across the network as PICs (Places In the Cloud), as shown in the figure below. 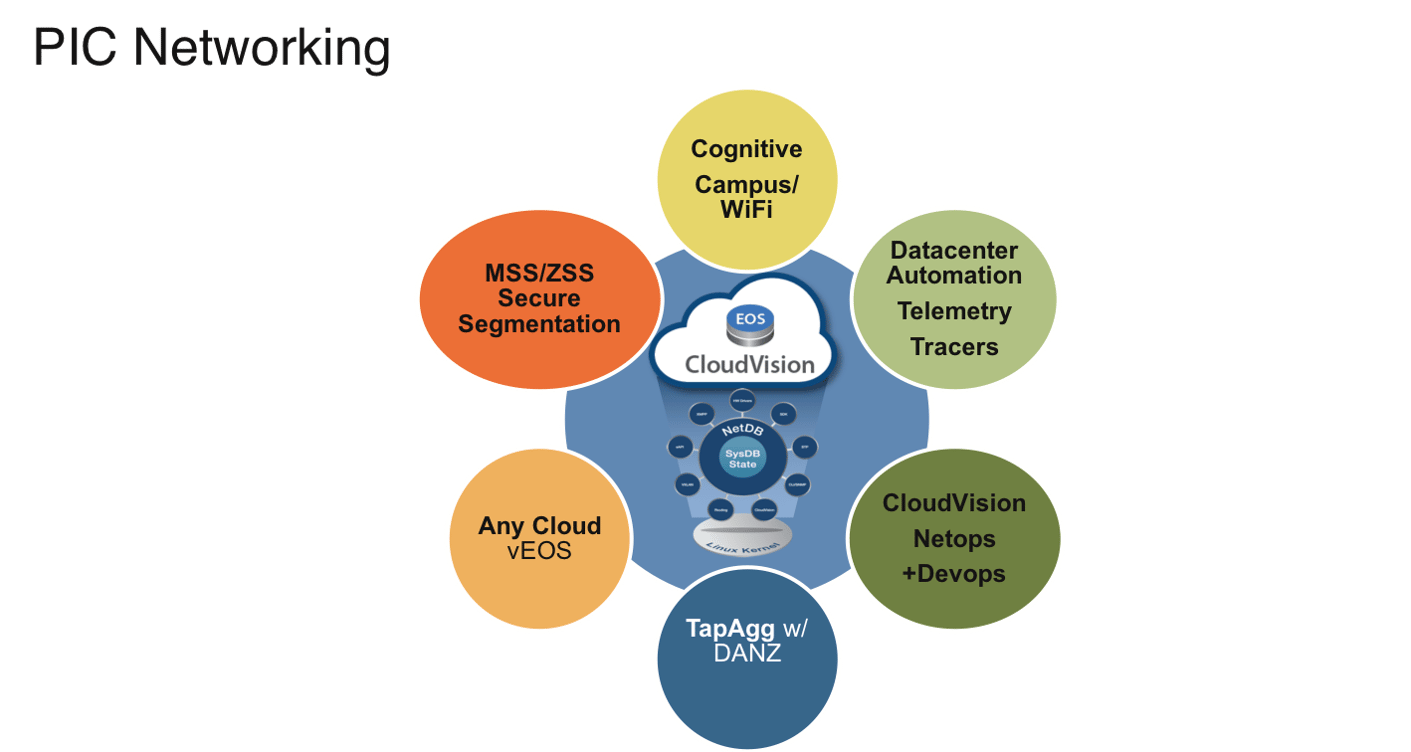 Based on the cloud principles of the 5 A’s -- Agility, Availability, Automation, Analytics and Any Cloud -- Arista marches on into the 2020 era driving greater cohesion of software from silos to our single binary image EOS foundation. At the core of our PIC strategy is Arista’s powerful Cognitive Management Plane (CMP) architecture, whereby the network auto-discovers connected devices, applications and streaming data. CMP assesses profile-based parameters such as configlets, bandwidth, packet size, open ports, white lists, devices etc. This solves the customer’s demands for mission critical, yet simple and actionable networking with many benefits including:

Places In the Cloud Ahead

I am excited by the power and potential of next generation cloud networking for Arista in an industry where networking is undergoing a massive transition. It brings a profound impact to our ecosystem partners and customers alike. Critical to successful cloud networking deployments are our first two acquisitions in 2018, Mojo Networks for cognitive WiFi and Metamako Systems for cognitive low latency networking. Arista is once again extending cloud principles by holistically breaking down the artificial divide that exists between campus, datacenter, core, branch offices, LAN and WAN to deliver uncompromised PIC networking for a multitude of configurations.


As we celebrate the journey of the prior decade, I am excited for Arista’s new decade ahead of cognitive cloud networking! As always I welcome your comments feedback@arista.com