Last August, Arista made its first acquisition, Mojo Networks, to transform the future of WiFi and campus networks. Just as Arista disrupted the datacenter with important architectural and technology-based innovations, I believe this is a similar pioneering step for the campus. Over the past two decades, the industry has deployed a WiFi controller-based architecture. This stagnant “WLC” approach for wireless connectivity has not evolved to address costly operational dilemmas such as:

…to name just a few

Arista WiFi from Mojo was built on a modern WiFi architecture leveraging fundamental technology innovations. Moore’s law has provided enough microprocessor power in WiFi Access Points to allow the control plane to be moved to the cognitive edge of the network. A WiFi “controller” was called a “controller” for a reason – it ran the control plane. Arista has innovated and made the dedicated appliance wholly unnecessary by using the cloud, not just as a place to host code that used to be software, but rather as technology to do things not possible in a controller. By leveraging the massive compute and storage resources available in the cloud, Arista’s Cognitive WiFi utilizes Machine Learning and AI with large data sets to make networks run better and faster. Arista’s datacenter technology innovations have been vital to building the public cloud as we know it today. Cognitive WiFi is also based on the cloud and extends Arista’s pioneering technology from cloud to clients.

WiFi should be a PIC- Just Another Place In the Cloud

The fact is that every WiFi AP must evolve to become cloud-managed, where the WiFi is yet another PIC not a parallel network in itself. And the challenge lies in successfully transitioning existing WiFi siloed networks into cognitive places in the cloud (PICs) with intrinsic automation, analytics and security. Why should campus network admins be chained to the network? Why should users have to flag WiFi issues? They shouldn’t. Campus networks should be intelligent and self-remediating. With the massive explosion of IOT edge devices, the campus must unshackle the chaos and complexity of the three-tier legacy and oversubscribed campus Access-aggregation-core with a spline-edge concept. In this two-tier model, collapsing the core and aggregation layers into a single tier spline fabric and then connecting to the edge layer of ubiquitous devices, be they wired or wireless, as equal citizens is a key tenet as shown below. 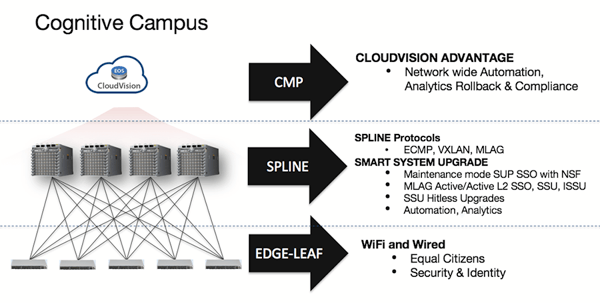 Figure: Instead of parallel architectures a single spine/spline fabric can manage all edge behaviors

Arista’s architecture for Cognitive Campus was driven by our customers who kept asking us for an equivalent high quality EOS® experience like they have today in the datacenter.

To enable the intelligent edge, the campus must first build a robust spine/spline network and provide a uniform management framework. Arista addresses these requirements with new platforms that enable a new, two-tiered campus architecture, and with support in Arista’s existing management platform, CloudVision®, for a new Cognitive Management Plane that extends out from the datacenter to the campus.

New Spline X3 platforms are collapsing the traditional aggregation/core offered in fixed and modular form factors. These platforms have sufficient headroom with switching capacity from 25-50 Terabits and density of up to 256 ports of 100G. Familiar features such as SSU and rollback for hitless-upgrades, and wire speed L2, L3 and L2 over L3 VXLAN data planes with open control plane options are inherent.

A single pane of glass for the Cognitive Management Plane with CloudVision was architected with a built-in repository engine for data driven actions. Unlike old-school polling, it offers cloud-like real-time state streaming (NetDB) and open source tools such as HBase and Kafka. The CMP repository was designed to drive network actions and analysis. Devices export all state via OpenConfig streaming to the Arista state-wide network data base (NetDB) capturing all device state over time. Applications access the state, and provide visibility and alerts, thereby enabling the cognitive actions needed to change, reconfigure, upgrade, remediate, enforce or notify as required.

Driving mobile wireless connectivity with our Mojo acquisition and wired devices based on EOS, we bring a rich suite of cognitive edge features. This includes device analyzers, client tracers, link optimizations and security functions such as WIPS. Siloed WiFi and wired networks with parallel and dual controller-based approaches are migrating to this uniform edge design with a common management and protocol framework. This reduces tiers and lowers costly capex and opex, enabling a thoughtful evolution to a cognitive architecture where our customers rethink the legacy box-based approach to an SDN foundation, driven by analytics, automation and cognitive methods. The explosion of users, IOT devices and bursty traffic requires the thoughtful migration to uniform networking and lower TCO. Arista is once again bringing our cloud DNA alive and proactively anticipating the disruptions in campus networking. Network leaders must start planning their new campus refresh and rethink old habits now.

I always welcome your comments at: feedback@arista.com